Claims of electoral fraud are as American as apple pie edit 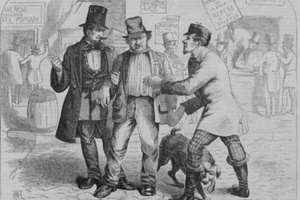 In the recent US presidential elections, two features raised many eyebrows, in the US and in Europe. In most swing states, Donald Trump had a sizable lead on election night, which vanished as mail votes – especially in big cities – were tabulated. This raised the suspicion that cities, largely democrats, waited for the results from rural counties to know how many votes they needed to overcome them. But the reason behind this was that the legislatures (with republican majorities) of these swing states prevented mail votes from being tabulated early[i], and allowed only a limited number of polling places in big cities. Rural counties would inevitably count faster than cities, and urban dwellers logically preferred mail voting to hour-long voting lines and risk being contaminated. One can imagine an election – let’s say for mayor of Greater London or Ile de France – where results from the richer western suburbs would be known much faster than those from the poorer eastern suburbs. Looking at the total over time would provide absurd and fluctuating results. Pollsters usually look for representative polling places or constituencies, not non-representative early results. But with the surge in mail ballots – tabulated after in person ballots – doing representative polls proved difficult.

The other strange feature is linked to a common statistical illusion in politics. When one looks at elections over long periods, it is easy to find states or counties that tend to always vote like the rest of the US – the so-called bellwether states or bellwether counties. Sociologically, they are close to the median voter, and tend to vote like her. Iowa or Ohio were not only swing states, but by winning them, one was almost assured to win the popular vote, and the majority of other swing states. Winning Iowa was a good sign with farmers, and Ohio is representative of the industrial Midwest, from Pennsylvania to the Great Lakes. These are only conditional probabilities, but some American pundits tend to be superstitious about them. If Trump, lost the election despite winning handily in Iowa or Ohio would be an additional proof of “fraud”. But this theory is a statistical illusion. If the sociology of one of these states diverges from the median US voter, this state is no longer representative. Missouri lost in 2008 this bellwether status. Despite Obama’s strong national victory, Missouri stayed red, and has remained much more republican than the nation ever since. Iowa and Ohio are no longer good indicators since 2020 – and possibly earlier – because they are too white, agricultural and industrial to represent well a culturally diverse nation. This is not specific to the US: after all, the Tories in the UK managed to win the 2017 election despite losing their Kensington constituency, probably one of the nation’s richest, and pick seats in Labour’s red wall (the industrial North of England, which had voted reliably Labour for ages). Electoral geography, and the most median representative voters are never set in stone.

In fact, the US electoral system is surprising for non-Americans. In many states, it is possible to vote by mail, or to vote in one’s preferred polling place, without a photographic ID. What prevents multiple voting, or voter impersonation? This does fuel many suspicion, but documented cases of fraud are exceedingly rare[ii]. State and federal penalties – at least five years or prison – are very harsh. Actually, instead of illegal voting, dubious voting restrictions – also called voter suppression – are much more common. Some states bar felons from voting, sometimes for life even after they’ve served their time. Given the severity of judges in the US, this can be a non-trivial portion of the population. In Florida, voters had decided by referendum to restore this right for felons, but the legislature almost nullified this by requiring that all fines and damages – that the felon isn’t always aware of – be paid beforehand. Patrolling with arms and uniforms in black or latino neighborhoods to intimidate or suppress voters[iii] – under the color of rooting out electoral fraud – isn’t necessarily illegal in some states. It is also not illegal to mislead voters with fake electoral letters. It is illegal to do this solely with a racial objective, but fighting a nonexistent fraud or getting a political advantage is not forbidden by the Constitution.

More than fraud itself, claims of electoral fraud and manipulation are a well-established American tradition. As American as apple pie… Fraud was real in the South until the 1960s. After the Civil War, the Reconstruction amendments had given blacks full citizenship and voting rights, but whites – which were democrats then – used violence and intimidation (the Ku Klux Klan) to take back power, and exclude non-whites from voting. The Jim Crow laws would for example require that a voter could read, or pay a minimal amount of poll taxes – but those whose grandparents could vote were exempted: the effect of these grandfather clauses was to prevent nonwhite vote, while letting poor whites vote. Allegedly, this prevented blacks from being manipulated by the Northern Yankees, and the vote was restricted to those who were “worthy of it”. Congress waited until the 1960s to put an end to this. From the early 19th century, claims of electoral fraud were also widespread in the North. Democrats – in the North much more progressive than in the South – would allegedly stuff ballot boxes and control immigrants’ votes (Irish, Italian, etc). Democratic political machines, like Tammany Hall in New York, had a reputation for corruption: they formed a full ecosystem between politicians, businessmen and voters. This was an extreme form of the spoils system logic: an elected politician would control local public jobs and contracts, and give them to those most able to muster voters for them during elections. Patronage and corruption are bad, but they were more or less accepted at the time. Political opponents would instead claims pure voter fraud, like stuffing ballot boxes, which wasn’t common. To stop this fraud, they would have happily restricted the franchise from the poor and immigrants, too illiterate and easy to manipulate to be worthy of voting. There was also a fear from white Protestants that Irish and Italian immigrants could not understand democracy, and would subvert the country to the Pope. Claims of electoral fraud are very ancient in the US: many “native” whites are uncomfortable with the idea that minorities and immigrants could swing an election, and “dispossess them of their country”.

Why are rules so different from one state to another? Why can’t the question be settled for good? Because Americans extend the majority rule principle to how elections are run. In Europe, political parties fight for power, but they respect electoral rules and don’t try much change to their advantage. In the US, election winners can appoint and dismiss higher civil servants (the spoils system), they can redraw outrageously partisan electoral boundaries (gerrymandering), and change electoral rules. Majority rule: winners decide, and can tweak the rules a little in their favor. Losers should do better the next time. But this majority rule is mostly at the state level, not the federal level. For the Founding Fathers, sovereignty resided in the states. The governor or legislature of Virginia have a free hand, because they represent the people of Virginia, and have a mandate to govern. States constitutions can be amended relatively easily by state legislatures or by referendum. On the contrary, at the federal level, the Founding Fathers feared that the majority could oppress the minority: the American people was not sovereign by itself, but through the states. Small states are overrepresented, and the rules of parliamentary obstruction and filibuster have long forced both sides to find a consensus. Amending the US Constitution on this topic would be extremely difficult, and there is no appetite for it. Hence, while local majority rule allows naked electoral manipulations, minority rights at the federal level prevent any national unifying framework. Since the 1960s and the Civil Rights Movement, the only limit to local majority rule is that it should not discriminate too much against minorities, at least not directly. As long as one party finds it useful to promote maximum voter participation, while the other tries to restrict it or suppress it, these local games of voter access and voter suppression will remain.

[i] In Arizona on the other hand, mail ballots were tabulated early, and they gave Biden an artificial early lead, before day ballots were counted. The fact that the right-wing Fox News declared Arizona for Biden early on, despite the remaining ballots, actually limited Trump’s ability to claim early victory. He called for patience with the Arizona results, before all ballots were counted, while he claimed vote counting should stop in other states.

[ii] While one can vote by mail or choose a polling place, vting multiple times is obviously illegal, and electoral boards can compare voter lists and electors ex post. Any local, state or federal prosecutor could launch an inquiry, based on fraud suspicion or legal complaints. Some irregularities are not si uncommon (for example, if John Smith Jr is recorded voting under the name of his deceased father John Smith Sr), but intentional fraud is very rare. Between 2000 and 2014, only 31 instances of voter impersonation were documented in the United States.

[iii] Before becoming a US Supreme Court Justice (and later Chief Justice), William Rehnquist was allegedly part of the republican Eagle Eye operation in Arizona in the 1960s. This aimed to suppress minority votes, by “verifying” their citizenship and literacy – literacy tests were still legal in the US (especially the South) at that time.