The story is unfurling and the dollar is unraveling edit 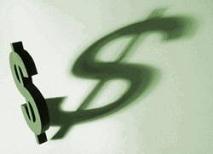 The dollar’s steady slip over the past few years has turned into a vertical drop. The immediate catalyst for the accelerated decline is the growing perception that the credit crunch has pushed the US Federal Reserve against a wall and the Fed will opt to take risks with the dollar rather than with economic activity, especially given the heightened political environment. Of course, part of the dynamic here is uncertainty and a high level of mistrust of each other's credit in the financial sector and time will reduce this uncertainty, but in the mean time opportunistic investors - those who wile away the hours hunting for conflicted policy makers  -  believe they have a conflicted policy maker firmly in their sights today.

Before the credit crunch and property slowdown, the strength of the economy allowed the Fed to be more even handed with potential risks. While US Fed Governors would dispute the reality, the market believes, that the Fed’s revealed preference has been for economic bail-out rather than monetary rectitude. This is why the price of non-monetary stores of value like gold and oil are shooting through the roof.

At what point will it end? This is not an environment where bargain hunters are waiting on the sidelines for a good level to pick up cheap dollars, it is one where the only bargain hunters are those trying to sell before others do. It is more about fear of being left holding dollars than consideration of long-term valuation. That said, the dollar's cause has not been helped by policy makers chiming in during the fall that the dollar remains overvalued.

Isnt the dollar decline a good thing? Perhaps but the market is becoming disorderly  - prices are gaping lower and buyers in size are hard to find - and so we should expect to see some central bank intervention. This intervention will be about steadying the dollar’s decline and re-creating a two-way market over the short-term, but not reversing the dollar’s slide. This will change when the dollar falls to that point which provokes a change of monetary policy in Europe  - by being so deflationary - and in the US  - by being so inflationary. We are clearly not there yet. I expect that point to be closer to US$1.70 versus the euro and US$2.20 versus sterling, than current levels. This is goods news for US exporters and very poor news for European exporters, though lower interest rates may support domestic consumption in Europe. It is amusing to recall that I did forecast at the birth of the euro, to much consternation of my London colleagues, that the euro would climb to US$1.50 between 5 and 10 years. It may well get there, but of course I did not anticipate its convoluted path or the particular turning points.

The analogy I would use today would be the circumstances surrounding the dollar's collapse in 1995, when the dollar fell to record lows versus the yen – not yet revisited. (One of the trigger's then was the conflict posed by the pressure for lower interest rates as a result of the Tequila Crisis.) There were repeated bouts of intervention in 1995  - mainly by the Bank of Japan - before the final turn which was accompanied by intervention and a change in policy in Japan and of policy objective in the US. Instead of the Bank of Japan read the ECB this time around. The summer of 1995 saw the birth of Mr. Rubin's “strong dollar mantra” though this mantra is now so debased that another one will have to be found. The one thing going for the dollar is that back then I used to have conversations with one of the key figures on "International" at (US) "Treasury", a boyish and very capable, Tim Geithner. He  is now the President of the New York Fed. If anyone knows what is going on, he does. Whether he can do anything about it, is of course, another story.