Despite the history of a weak dollar would you rather buy a Mercedes or a Ford? edit 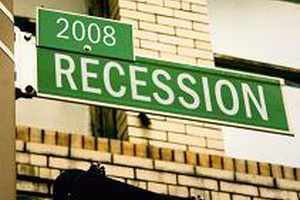 We are entering in different phase in stock market weakness, one that gives me some cause for optimism. I believe that in recent weeks what we have witnessed is a transition from “liquidity fear” to “recession fear” or for the more technical, from liquidity risk to credit risk. It may be hard to notice the difference. Both forces are bad for stock markets in general. But they have a different impact on individual stocks and therein lies the opportunity for opportunistic investors who don’t mind a bare-knuckle ride in search of superior returns.

It is very hard for any stock to rally in an environment where liquidity is scarce and the market is de-leveraging. Often the only thing that goes up in these environments is cash or perhaps, government bonds. Stock markets have a more complex affair with recessions. Forward-looking stock markets often rally long before the recession has ended and sometimes prematurely. Some stocks are seen as more “defensive” and perform better in a recession than other more “income-sensitive” stocks. Traditionally defensive stocks are utility companies who have captured markets, low-cost retailers, defense contractors, tobacco distributors and other reflections of sins that are always with us come boom or bust.

The coming recession will be characterized by three things. First, the banking system has been wounded. Governments have tried to patch things up and they will ultimately succeed in plugging the holes. It’s hard for them to fail now that they practically own the banking system in many countries. But the psychology of banking has been irretrievably altered - or at least for the next five years before all is forgotten and the next boom is born. One way of thinking about this is to note that bankers explicitly or implicitly look back over the last five years when considering their lending decisions. At the beginning of 2007 for example, the previous five years were the glory years for banks. Defaults were low. Asset values were rising rapidly. Investments and the global economy appeared more diversified and decoupled than ever before. From this perspective, a low risk premium was justified. Lending conditions were good and the banks lent even on low margins.

Looking back today is a different picture. Within the five year window is now a major calamity that would require hefty lending rates or iron-clad safety to justify the potential risk. This will not bode well for the supply of credit and the stock markets will place a premium on cash flow and retained earnings. The old-fashioned diversified conglomerate, able to spot opportunities and with the cash flow to take advantage of them, will come back into fashion. Many of these conglomerates have been victims of financial fashion in the developed world but prosper in emerging markets.

The psychology of savers has been similarly affected. Over the past few years consumers were prepared to spend all of their income and save little or none of it. They felt that this was alright because their wealth, tied up in housing and stocks appeared to be rising strongly. They were in effect spending from wealth. Some of this wealth now appears to have been fleeting if not illusory. A lesson has been learned. Savings rates will rise, consumption will fall, hurting companies that produce goods and services that consumers splash out on when they feel wealthy: cars, white goods, overseas holidays etc.

The third point to make about this environment is that while stock markets in general may be subdued in this economic environment, the age of foreign exchange and bond market volatility has returned and this will have a bearing on individual corporate earnings. Governments have increased debt massively. I do not worry too much about this today, but ultimately this debt can either be paid through higher taxes which will restrain growth and support bond prices and currencies, or it can be paid back using the inflation tax, undermining bond and currency markets. Every government will argue that they will do neither. Of course if they had no voters to worry about they should do both: printing money today to offset the destruction of capital that has taken place and raising taxes tomorrow when the economy has recovered.

Back in the real world the issue will be determined by political preferences and these will be determined by the demographics. Old populations, with a significant cohort of voters that is retired and living off fixed annuities or in rented accommodation, will prefer the government to tax those who are working and not find recourse to the inflation tax. This is Japan and “old’ Europe. Young, heavily indebted populations, living in highly mortgaged homes will prefer their government to tax them less and inflate their debts away - to the chagrin of their grandparents. This is the US and to a lesser extent the UK, Australia and Canada. Therefore the dollar’s rally will be more short-lived than the yen and the decline against the euro has further to go. From a stock point of view that is good for US, British, Australian and Canadian exporters and Japanese and European importers. That said, this picture is clearer at a sector level than a stock level. Many European and Japanese companies have been here before and many of them have found a way of dealing with the discipline of strong currencies – in part by shifting production overseas and by focusing on non-price sensitive excellence. Despite the history of a weak dollar would you rather buy a Mercedes or a Ford? These days, most investors can only afford the Ford. Good luck.