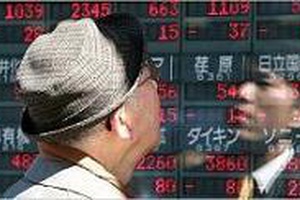 In the wake of the credit crunch banks’ capital cushions have deflated dangerously. And, in response, some have turned to one group of investors untouched by subprime credit or by mark-to-market reporting requirements: sovereign wealth funds (SWFs). Is this a good, or a worrying development?

On 26 November, Citigroup, the world’s biggest bank, said it would sell $7.5 billion of mandatory convertible equity units with an 11% coupon to the Abu Dhabi Investment Authority (ADIA), the biggest sovereign wealth fund.

On 10 December, UBS, a Swiss bank, made the surprise announcement that it too would place the equivalent of $11 billion in mandatory convertible notes with a 9.9% coupon to investors, including the Government of Singapore Investment Corporation – all the more interesting given that Zurich and Singapore are arch rivals as financial centres.

Finally, Merrill Lynch, announced just before the close of the year a $5 billion placement of equity-linked instruments with Temasek Holdings, another government investment corporation based in Singapore (hyperlink).

Good sense
It is interesting that while by day bankers justify the egregious compensation packages they pay colleagues on the basis that they are forced to do so by the cold ruthlessness of the market place they inhabit. By night, when things go wrong, they are bailed out by easy money from local central banks, regulatory forbearance and fresh capital from government investment agencies. Bankers would appear to take a market view of rewards but a public welfare view on risks. But if we put that aside and put aside for one moment the issue of whether we should worry about SWFs applying excessive political influence on the firms they have invested in, the purchase of bank shares by SWFs makes good macro-economic sense.

The commotion about the large reserve build-ups in Asia and the Middle-East always struck me as a little odd. The ability of countries to save or spend more than local capacities allowed seemed to me to be a measure of the success of global finance, not a failing. It also seems reasonable to me that after an over-investment boom that crashed traumatically, or the sudden rise in the prices of commodities that they export, that some countries would choose to save more than they could invest at home.

But, what I worried about was that these national savings, there for the benefit of future generations, were not being managed with long-term investment benchmarks in mind, rather from the perspective of central bank liquidity managers. The real problem is not the quantity of net savings, but that there was a concentration of international savings invested in short-dated United States government or agency paper. This concentration lowered the risk-free rate and encouraged predatory lending to poor borrowers by bankers on the hunt for margins. There was also a concentration of exposure to the US dollar of the national wealth of many South-East Asian and Middle East countries.

It isn’t just the issue of risk concentration, this was inappropriate asset allocation of national savings. Long-term investors, unconcerned about daily volatility, should be earning the liquidity and market risk premia by buying diversified portfolios of undervalued stocks and investing in emerging economies, not by the most liquid, safest instruments in the most developed economy. It was the appropriate allocation of course for liquid reserves.

State control
But should we not be worried over the influence on corporate decisions of foreign governments who own the SWFs? It is interesting that the same people who ask this question often see nothing wrong with the investment activism of CALPERS and ABP Investments, the two largest public employee pension funds. Is CALPERS not a Californian SWF? What justifies saying no to an SWF investor and yes to, say, a private equity group with former Prime Ministers and Presidents on its board?

Going down the route of investment protectionism will reduce the value of local assets and, as with all protectionism, curb the discipline on management. I hesitate to offer a solution, but where there are legitimate concerns, one half-agreeable solution is to ask SWFs to pass on their voting proxies to other shareholders - I first heard this idea from Dr. Helmut Reisen at a meeting of the OECD Emerging Market Network. .

But by and large we should thank our lucky stars for SWFs and encourage them to play their proper role as long-term investors.