France, Britain and the Future of Europe: The Gathering Storm? edit 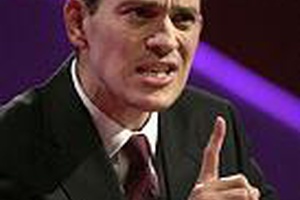 Two speeches, two languages, two mindsets, two audiences: one looming battle over the future of Europe? UK Foreign Secretary David Miliband's speech in Bruges on 15 November and French President Nicolas Sarkozy's speech to the European Parliament two days earlier could hardly be more different in their tone, style and vocabulary. Each, clearly, had the other in its sights.

Both begin with a reminder that the EU's raison d'être was always to transcend its fratricidal past by uniting around common values (Miliband) and the quest for a common destiny (Sarkozy). The latter implies a political project, the former a common process. These are not the same thing.

Both speeches also aim to rectify a national impediment with regard to Europe.

For Miliband, speaking at the College of Europe in Bruges, the task was to exorcise the ghosts summoned up by Margaret Thatcher's (in)famous Bruges speech of 1988, in which she warned against "a European superstate bringing in socialism by the back door", thereby sparking a rallying cry for generations of British Eurosceptics. Tony Blair, on several occasions, insisted that Europe would never be a superstate, but in Warsaw in October 2000 he had, in a misguided moment, argued that the EU should become a superpower. If there are two things that send shivers down British spines, they are the idea of a European superstate and the idea of a European army. Miliband categorically rejected both terms, and insisted repeatedly that the Union "is not and never will be" either a superstate or a superpower. Between them, these two words appear nine times in the speech. That there was never any serious prospect of either is beside the point. The aim was to remove them, once and for all, from the British debate on Europe. Discourse seeks to deal with perceptions as much as with reality.

Sarkozy's ghost is the French "Non" to the Constitutional Treaty in 2005. But instead of trying to bury that verdict, he insisted that all European leaders must listen and respond to it. The two greatest fears of the French, as expressed by the partisans of the "Non", are the material threats posed by globalisation and the loss of national and cultural identity implicit in the constant expansion of the European Union.

Whereas Miliband seeks to consign Thatcherism to the past, the better to lay out the EU's future, Sarkozy's discursive European vision is (at least in part) directly informed by the lessons of the "Non".

Miliband innovates by offering, as an alternative to Thatcher's "superstate" and to Blair's "superpower", the notion of Europe as a "model power", a notion which recurs no fewer than nine times in the speech. What does he mean by this? The expression contains both prescriptive and substantive elements.

European integration, Miliband argued, "can chart a course for regional cooperation between medium-sized and small countries". While falling short of advocating a "multi-polar" world (a notion seen in the UK as French code for anti-Americanism), such a hymn to regional cooperation nevertheless suggests a belief in a world structured by an ever smaller number of ever larger units, along the "model" (the word recurs thirteen times) of the EU. Is it possible that here, finally, the UK has produced a genuine vision for the EU?

Substantively, the concept of "model power" contains four policy imperatives, all of which shift the debate away from the "focus on internal change" which, for Miliband, has dominated the Union over the past fifty years. Although he accepts that the modernisation of the EU's social and economic systems requires continuing reform, his concern is to have the EU focus on the world beyond its borders: "the defining challenges of the 21st century are global". His four priorities are: openness, sharing, international law and environmentalism. In each of these domains, he insists that the EU can lead the world.

"Openness" is a catch-all concept, sidestepping the polemics behind "globalisation", which, for Miliband, requires, above all, management. Europe, he argues, must be wide open: to trade, to ideas, to investment and to services. Such policies will also require open doors to immigrants but, in the long term, they will also promote development in the countries of emigration, thus helping to stem migratory pressures. With an eye across the Channel, he delivers an impassioned rejection of protectionism, yet insists (almost as an afterthought) that the EU "model" nevertheless reconciles economic dynamism with social justice.

Under "sharing", Miliband sees the EU helping to "overcome religious, regional and cultural divides, especially with the Islamic world". Since the EU itself represents "the triumph of shared values", it is ideally placed to share those values even more widely, through both institutions and activities spreading ever further outward from the European heartland. Again, with an eye to the current occupant of the Elysée Palace, Miliband argues that there is no finalité to this process, no end to the potential enlargement of the EU to all of its neighbours.

His plea for the promotion of international law and human rights updates Tony Blair's 1999 Chicago speech by showcasing humanitarian intervention, the responsibility to protect and the cause of international crisis management. The EU leads as a model power in deploying the entire range of crisis management instruments developed by the post-Saint Malo process of ESDP: from military war-fighting capacity to the subtle art of state-building and national reconstruction. Nicolas Sarkozy and Bernard Kouchner could only applaud!

Finally, Miliband sounds the alarm bells of environmentalism, noting that "any model power in the 21st century must be a low carbon power". Regulation is imperative and the British foreign secretary does not baulk at proposing a European Carbon Bank to set future emissions limits.

Miliband presents his proposals as concrete, pragmatic measures, devoid of any political dimension - policy without politics. Nicolas Sarkozy's speech is highly abstract and unashamedly political. The message addresses the audience: the British have never accepted that the EU is a political project, and the French have never perceived it as anything but.

The centrepiece of Sarkozy's oration is the crusading belief in the transformational value of political debate. At the heart of his argument is the assertion that "I have always preferred the rule of the majority to the rule of unanimity" - "j'ai toujours préféré la règle de la majorité à la règle de l'unanimité". This is, after all, a speech to the European Parliament... His broader point, however, is that Europe as a whole must engage in an intense and comprehensive political debate about its future direction, the outcome of which will be the triumph of one side of the argument over the other and - according to the rules of democratic procedure - the disciplined acceptance of the majority view by the minority. Against Miliband, who pleads for the rule of unanimity, as being "respectful of national identity", Sarkozy insists that unanimity empowers minorities, prevents bold initiatives, and ensures impotence.

Sarkozy offers, as an example of the political process in the EU, the trans-national debate which eventually persuaded those who had actually ratified the Constitutional Treaty to make do with the Reform Treaty ("a political victory of Europe over itself" - "une victoire politique de l'Europe sur elle-même") - an ironic negation of the majority-rule principle he had just enunciated (according to which France should have aligned itself with the majority in favour of the Treaty)! He offered three further policy areas where the application of politics can take Europe forward.

The first is the protection of European identity. Sarkozy seeks to maintain internal diversity within a single civilisational framework (one of Europe's greatest riches) by ensuring protection against outside forces which might call that into question: by implication, the accession of Turkey. Where Miliband seeks to expand the diversity-in-unity dialectic, and explicitly rules out finalité, Sarkozy couches finalité (of borders and project) as a political imperative. Europe, he argues, must also protect its citizens against the risks and dangers of globalisation - what he calls the "commercialisation of the world" ("la marchandisation du monde"). This is his second key policy area. Where Miliband sings the praises of openness (while not entirely forgetting social solidarity), Sarkozy reverses these priorities. The keynote of his discourse is "protection". The rider is that this does not amount to protection-ism. Europe, he states, has embraced the market. In this way, Sarkozy and Miliband, preaching separately to their own converted, declare the glass to be half full or half empty, depending on national perspective. Beyond the distinctive cultural rhetoric, are they actually arguing for different political realities? On inclusion/exclusion (central to the notion of project) clearly yes, on markets and social policy (largely about an ongoing process) probably not.

Sarkozy's third priority policy area is also Miliband's: Europe's security and defence policy. Though Sarkozy offers far fewer policy details than Miliband, here again, there is little doubt that both speakers and both countries are rowing in the same basic direction. The only shadow on the horizon - and it could be a big one - remains the unspecified relationship which each will seek to establish with the one superpower. Sarkozy's speech to the US Congress on 7 November and Gordon Brown's speech to the Mansion House five days later staked out the claims of both leaders to be America's best friend. What exactly does each mean by that? In the impending political process of re-establishing a balance between Europe's defence ambitions and the new structures of a transformed Atlantic alliance, the answer should become clear. Objectively, both France and the UK have identical national and European interests in striking the correct balance. The chances are, however, that past discourse and perceptions will result in their colliding over an issue which ought to unite them. For France, defence policy is an integral part of the broader EU project, for the UK it is largely about a process of security adaptation.

Beyond surface similarities in key policy areas, the deep-rooted differences of overall approach to the EU suggest inevitable battles ahead. Sarkozy sees the EU as a political project with definitive borders and clear strategic objectives. Miliband (and his leader Gordon Brown) see it as a technocratic process engaging tactically with an ever expanding hinterland and global horizon. The chances of one side accepting to step democratically in line behind the majoritarian "victory" of the other are slim indeed.