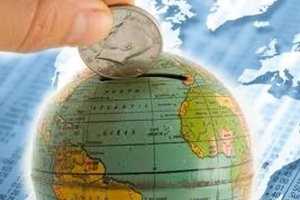 As economies begin to orient themselves towards recovery and growth in a post-COVID-19 era, they will first need to disentangle themselves from their prior bedfellows, the state, whose courtship was necessary for survival during the pandemic.  Such bedfellow relationships have become increasingly common as government intervention is urgently needed for economic stabilization. Governments have also embraced their new role with vigor. According to the IMF, as of April 2020, countries have committed around $8 trillion to combat the pandemic and to remedy its ill effects on economies and societies. Decisions about how this money will be spent will undoubtedly recalibrate the logic of capitalism for years to come.

Disentangling from deep reliance, for which there seems to be no foreseeable end date, is deeply concerning. We believe a potential solution might be to limit state intrusion in the first place, by employing special purpose financing vehicles to distribute state funds. These vehicles can be analogous to Sovereign Wealth Funds (SWFs) but with one exception – in addition to the mandate that is conventionally associated with SWFs, there is also an expiry date. With such a special purpose vehicle, state assistance can be converted into equity stake, that can be assembled into a portfolio held by a SWF.

During a pandemic, the private sector seeks government assistance in the form of loans, guarantees or state grants. Following the Global Financial Crisis of 2008, governments have become increasingly hesitant to hand out public funds via these mechanisms as they are not protected via conditionality. The use of public funds for private risk-taking of banks fell under heavy criticism in the aftermath of the Global Financial Crisis in 2008. In 2020 an especially hard hit sector is the airline industry. The mechanisms available to enforce conditionality such as equity purchases however, are intrusive and weaken firms’ accountability to their shareholders toward the maximization of share value.

A SWF with an expiry date, permits the use of market mechanisms to preserve public interest while contributing towards recuperating the economy. The fund acquires shares, silent partnerships or takes over other components of company equity. Through recapitalization, the assets of the fund grow during periods where capital injection is needed. The funds shrink during periods of economic recovery. The fund’s expiry date ensures the eventual transfer of its equity stakes to private ownership, either structured or unstructured. The proceeds from the asset transfer can be used to advance broader national goals, such as for financing the low carbon transition for addressing the climate crisis. The Expiry date is also important in that the choice to create a SWF is highly political and can lead to unintended consequences over the long run, notably the crowding out of the private sector. This has been recently demonstrated in the book Capital Choices.

Such a mechanism will also allow states to participate in the economic recovery that the public spending is geared to facilitate, and ensures to avoid handing out money without conditionality to hard hit sectors. That helps to offset voter’s distrust about large bailouts in the past, and assures accountability to the taxpayer. Due to these benefits, in April 2020, Germany created an Economic Stabilization Fund Wirtschaftsstabilisierungsfonds, with € 600bn in assets, of which €100bn is for equity investments, €400bn for guarantees, and €100bn for refinancing through Germany’s state owned development bank the KfW Group. Similarly, the Austrian government has created the agency, COVID-19 Finanzierungsagentur des Bundes COFAG. Norway has created the Government Bond Fund as a temporary measure with $5bn to facilitate access to liquidity for major companies during the Coronavirus outbreak (see table).

Although this sounds like a fundamental shift in capitalism, it is indeed the type of compromise between taxpayer interests and shareholder preferences that has now become vital to a pandemic-era global economy. Conventional means of state intervention preferentially benefit some and penalize others. There are also various trade-offs intrinsic to conventional instruments such as rescue aids, equity injections, asset purchases, guarantees on loans and other contingent liabilities. There are also issues of ownership that need to be resolved. The recent debates about salvaging the Austrian national carrier, which is owned by the German Lufthansa, has underscored these issues. While Lufthansa is in discussions with the German government regarding a US$10 billion rescue package, Austrian Airlines has also sought US$850 million support from the Austrian government in the form of a loan or grant.

Public spending is bound to intensify over the coming months and even years. Increased spending will undoubtedly go hand-in-hand with increased scrutiny and demand for fiscal discipline. An old ally – the SWF – might indeed be governments’ best hope in balancing public responsibility with private interests in a post-pandemic economy. 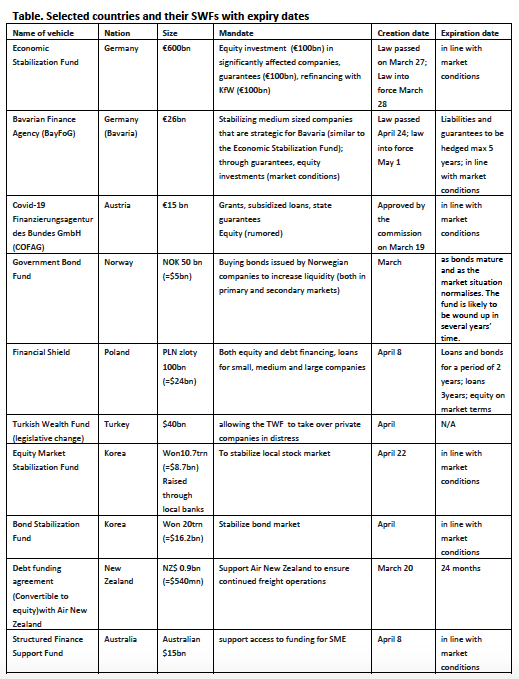