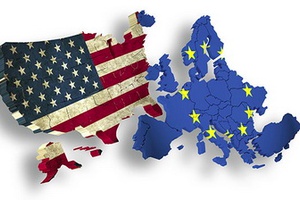 Europe and America have been strikingly different in terms of the Corona-era big-relief packages, and the roll out of Covid-19 vaccination. These differences are rooted in differences in their federal governance. Governance differences in the federal system matters also for migrants skill composition, tax burden, and the generosity of the welfare state.

Ageing of the population is another fundamental factor, inter-related with migration and the generosity of the welfare state. In developed countries, the destination of migration from around the world, populations are ageing dramatically: in 2017, the world population aged 60 years or older was more than twice as large as in 1980, and two-thirds of the world’s older persons lived in developed regions (United Nations 2019).

In 2010, the proportion of people aged 65 and older constituted 13.1 percent in the US, whereas in the core EU countries it was significantly larger: 20.8 percent in Germany, 20.3 percent in Italy, 16.8 percent in France, and 16.6 percent in the UK (United Nations, 2013). Although the population in the US is getting older, and its numbers are growing more slowly, than in the past, the demographic future for the US is younger than that of the core EU countries. In particular, the US population is projected to grow faster and age more slowly than the populations of its major economic partners in Europe. Figure 6 describes the ageing patterns of the US and Germany (the largest EU economy) in terms of the age dependency ratio. 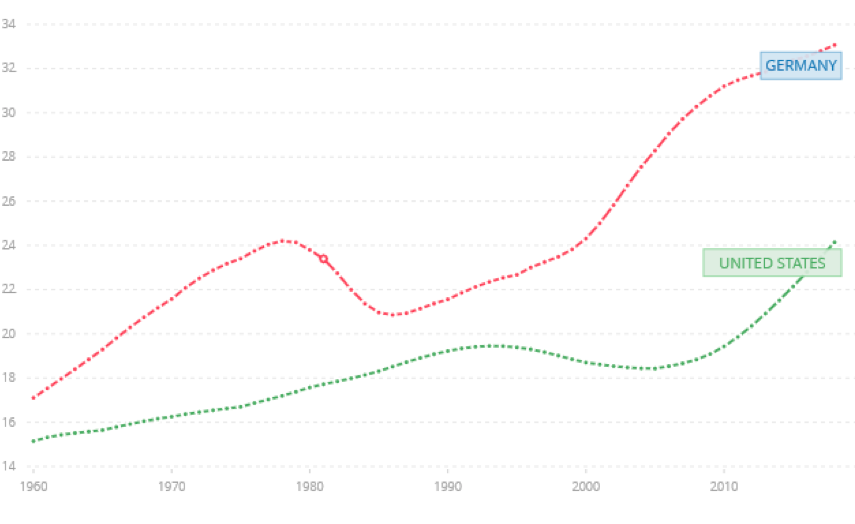 Ageing drives up provisions of social benefits, a measure of the welfare-state generosity. This helps explain, in part, why EU is a more generous welfare state than the US.

There is also a significant difference degree of labor mobility between the EU and the US. The average response of the population to a local demand shock in Europe turns out to be much more limited and slower than in the US (Beyer and Smets (2015), Arpaia et al. (2016), and Dao et al. (2018)). Beyer and Smets (2015) compare the labor market response to region-specific shocks in Europe and the United States and to national shocks in Europe and investigate changes over time. They employ a multilevel factor model to decompose regional labor market variables and then estimate the dynamic response of the employment level, the employment rate and the participation rate using the region-specific variables and the country factors. They find that both in Europe and in the United States labor mobility accounts for about 50% of the long-run adjustment to region-specific labor demand shocks and only a little more in the United States than in Europe, where adjustment takes twice as long. In Europe, labor mobility is a less important adjustment mechanism in response to country-specific labor demand shocks that cause stronger and more persistent reactions of the employment and the participation rate. However, they detect a convergence of the adjustment processes in Europe and the United States, reflecting both a fall in interstate migration in the United States and a rise in the role of migration in Europe.

Overall, and dissimilar from the US, the European migration exhibited significant bias toward low-skill migrants; see Boeri, Hanson and McCormick (2002) and Boeri (2008).Table 1 compares the stocks of migrants, by educational attendance, between the EU-15 and the US;. Indeed, it is clear that more than 40% of the stock of migrants in the US have undergone tertiary education, whereas the corresponding figure for the EU-15 is less than 25 per cent. Similarly, about as many as 48-–59% of the stock of migrants in the EU-15 have only primary education, whereas the corresponding figures for the US are only 22-–26%. 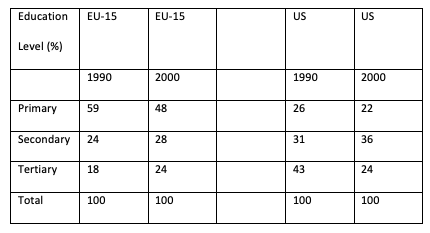 Evidently, the coordination among countries (states) of an economic union affects fiscal and migration policies, as compared to a competition among them. This comparison may offer some explanation to the differences between the U.S. (coordination) and the EU (competition) with respect to the size (generosity) of the welfare state and the share of high-skill migration in total migration.

There are in in the model economy only two types of workers (high-skill and low-skill), they are interested only in the share of just one of these two types of migrants in total migration. Specifically, we look at the high-skill share among immigrants.

Figure 2 depicts the social benefit (b) under the two institutional regimes (competition and coordination) for different levels of total factor productivity (A). Figure 4 depicts the share of high-skill migration in total migration

The following Figures 2-4 demonstrate how the competition regime differs from the coordination regime in terms of the provision of social benefits, the share of high skill migrants in total volume of migrants, and tax rates. 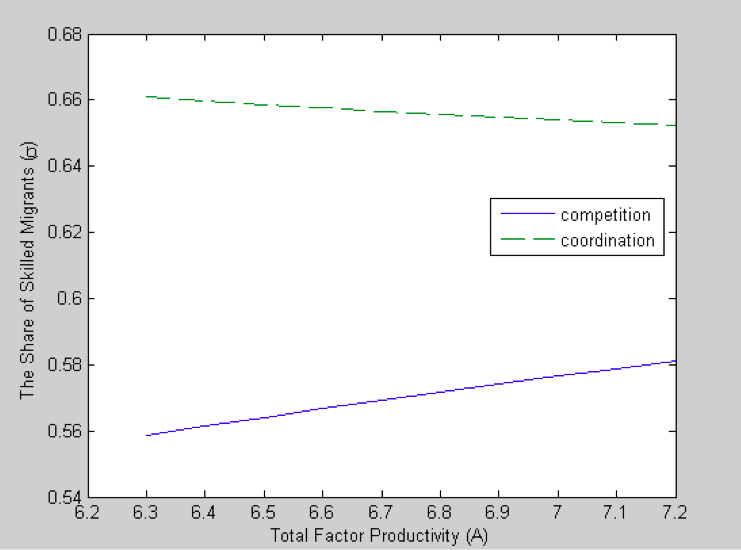 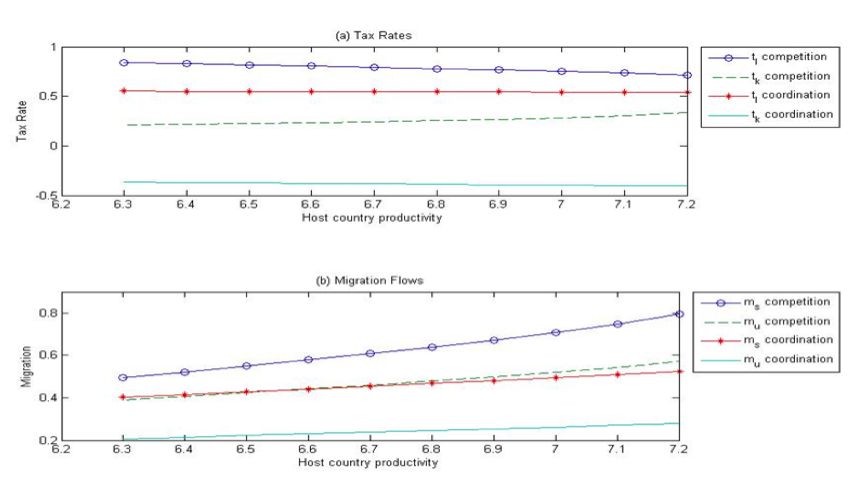 Our main interest is to compare the provision of social benefit (b) and the share of skilled migrants in the total volume of migrants (σ) under the two regimes. Interestingly, coordinating the fiscal and migration policies allows the union-member states to offer less generous social benefits than when they compete with each other. The rationale for this result is rooted in a fiscal externality associated with migration.

There are gains and losses brought about by migration. A union-member high-skilled native born has an infra-marginal gain from either high-skill or low-skill migration stemming, from the diminishing productivity of either type of labor for a fixed stock of capital (triggering the “business” lobby). The gain stems from the fact that each migrant (whether skilled or low-skilled) is paid according to the productivity of the marginal migrant, which is smaller than the average productivity of the migrants (of the same type). On the other hand, the native-born population shares with migrants the tax collected from capital income (recall that migrants have no capital), because the transfer

that the migrants receive is not financed fully by their labor income tax. That is, the capital tax revenues paid by the native-born population ‘leak’ also to the migrants.

The fiscal burden imposed by migration on the high-skilled native-born (both high-skill and low-skill) is reinforced when this migration is composed of low-skill migrants. This is because the low-skilled not only possess no capital; they also have low wages and accordingly pay low labor income taxes.

Each union-member country in a competitive regime evidently balances at the margin the gains and losses from migration. In doing so, each country (being a “utility-taker”) takes the well-being of the migrants as given and the union wide rate of return on capital, It thus ignores the fact that when it adopts a fiscal-migration policy that admits an extra migrant, it raises the well-being that must be accorded to migrants not only by it but also by all other union member countries, in order to elicit the migrant to come in. As a result, it offers migrants too high level of the social benefit (b), and admits a too high share of low-skilled migrants - a “fiscal leakage” externality. Indeed, Figure 3 demonstrates that the union member states admit a higher share of low-skill migrants when they compete with each other than when they cooperate. As expected, the cooperating states, facing an upward-slopping supply of migrants (of both types) exploit their market power by admitting smaller numbers of high-skill and low-skill migrants, as compared to the case when they compete with each other.

Obviously coordination allows the union to exercise monopsony power over migrants. Therefore the migration volumes under the policy- competition regime exceed those under the policy-coordination regime. Specifically, competition over low-skilled migrants, who come with no capital, induces the individual member state to raise the social benefit, b, so as to attract more migrants when starting from the coordination equilibrium. As a result, the social benefits in all other member states must also be raised to keep these migrants at their own economy. This amounts to greater income redistribution from the high skilled native-born who are in power to the unskilled immigrants– a negative externality.

Federal governance matters. Policy coordination allows federally organized economic union to exercise monopsony power over migrants more powerfully than a loose federal system. Therefore in-migration volumes under the policy-competition regime of a federal system exceed those under the policy-coordination regime. We develop a model demonstrating that with loose federal governance, competition over low-skilled migrants, who come with no capital, induces the individual member state to raise the provision of social benefit, so as to attract more migrants, compared to a coordination equilibrium. As a result, social benefits provided by member States must also be raised to keep these migrants at their own economy. The excessively high income redistribution is a reflection of a negative fiscal externality.

Razin , Assaf, and  Efraim Sadka (2021), “Migration and redistribution: Why the federal governance of an economic union does matter,” Journal of Government and Economics, January.