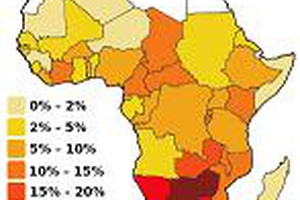 Sub-Saharan Africa is by far the world region most affected by AIDS. It is estimated, according to UNAIDS, 2.2 million people were newly infected with HIV / AIDS in 2008, bringing to 24.1 million people living with HIV / AIDS in the worst case. Because there seems to be a link between AIDS and poverty in Africa, and a link between poverty and bad institutions, the epidemic raises the question of the quality of institutions, and after all, it can appear as an incentive to improve institutions.

Two thirds of the world total of 32.9 million people living with HIV / AIDS live in this region, and three quarters of all AIDS deaths in 2007 occurred there. The 21 countries with the highest prevalence of HIV in the world are all located in this part of the world. There are approximately more than 14 million orphans because of HIV/AIDS.

AIDS is not only a human disaster, it is also a (macro) economic issue: for the whole of Africa, AIDS would cost between 11.7% and 35.1% of gross annual product. According to the Journal of AIDS (No. 196, 2007), 31 countries in sub-Saharan Africa have lost on average 0.7 percentage point growth rate of GDP per year between 1992, with a range of 0.1 to 2.3 %, and 0.5 percentage point growth rate of employment. AIDS has crippled Africa's labor force: since the beginning of the epidemic, the accumulated losses of workers represent 6.06% of total labor workforce. According to ILO, this figure will rise to 11.85% in 2020... The accumulation of human capital (knowledge, know-how and so on.) in Africa is thus caught in a "trap". AIDS impedes the economic development of Africa.

Faced with this situation, beyond prevention or treatment, both of which still oppose many people, Africa needs to improve its institutions to effectively fight against this global pandemic. First because only under governments who have good governance can we be sure that the means set in place both for prevention and treatment will reach their destination.

Secondly because good governance creates economic growth and therefore reduces poverty by increasing opportunities. However, in general, there is a correlation between income and the prevalence of AIDS. 11% of the population at low risk of the poorest quintile is affected by the HIV virus while this proportion is only 0.9% for the richest quintile. The 10 richest countries, measured by PPP GDP per capita in 2008 worth $ 57,670 have an AIDS prevalence rate of 0.27, while more than 10 poor countries (excluding Afghanistan's only non-African is recovering from the last 11 of world) are African, with a GDP per capita in PPP value worth $ 517 in 2008 have a prevalence rate of almost 5%. Logically, the rich countries are doing better than the grossly poor countries of Africa. More income means access to more information and education. And one can easily understand the famous trilogy: abstinence, fidelity and condom. This does not seem to be obvious in Africa, where there is nearly no flow of information and the literacy rate is 60%, while in Europe for example, it borders on 100%. Remember also that this figure is somewhat relative in terms of quality for Africa, given the probability that it is negatively affected by hidden corruption, a major feature of this continent. In such a situation, we understand that much of Africa does not understand the message.

And even if we have the training, nothing necessarily guarantees that the African who lives in deepest Africa knows that AIDS can be transmitted through breastfeeding or that science has developed techniques that can bring relief in case of infection. For, African countries not always have the means to expose their population to the use of ICTs, a media for gaining access to information. According to Internet World Stats, Africa only has 86 million internet users, or a penetration rate of 8.6%. Tunisia, the first African country in the ranking of Networked Readiness Index which measures the preparedness of countries to effectively “leverage” ICTs, ranks 39th in the world in 2009-2010. Improving institutions would increase revenue, which would induce an increase of access to information and quality of education. Hence a high probability of decline in prevalence rates.

Moreover, improving institutional quality will also enable an independent coverage of the cost. The actual annual cost for treatment, which extends by one year the life of someone infected with HIV, ranging according to the WHO to $ 1,500, is very high for an average African who has an income of 1636 $. Even if the external support is highly demanded across the world, can we mobilize 36.15 billion annually for HIV in Africa? It seems logical that Africa must also take responsibility. In the event that the fund exists, Africa is expected to distinguish itself positively by a successful caring, which presupposes that it desperately needs good institutions (less corruption, etc.).