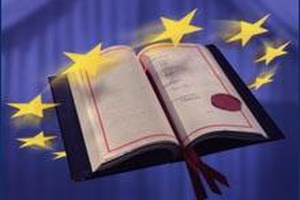 Royal thinks the Constitutional Treaty can be renegotiated. This option is blocked, according to my thinking. The EU15 leaders never explicitly asked for a Constitution because they could not agree that the EU actually needed one. The Constitution’s ad hoc nature stemmed from the necessity of lining up an ad hoc coalition of idiosyncratic national concerns behind the Constitution. This ad hocery why no one could explain exactly why Europe needed the Constitution it had lived without for half a century and five enlargements. The real argument – that Europe needed to fix-up the Nice foul-up – was not one that leaders like Jacques Chirac and Tony Blair could make; they had promised their nations that the Nice Treaty was good enough.

Getting the 15 to agree to negotiate a new Constitution would be hard; things are much worse now with the 27. Importantly, many of the newcomers disagree with ‘Old Europe’ on matters of social policy, taxation and labour market regulation. The Constitutional Treaty did not, in so many words, implement Social Europe, but it slipped a wedge into the crack that might have become Social Europe. The combination of removing the famous three Maastricht Treaty pillars and adopting the Charter of Fundamental Rights (with its many articles on social policy) introduced much uncertainty into EU law. One cannot know how the contradictions between the Charter and EU members’ national laws would have been resolved, but it is quite possible that the federalist instincts of the European Court and the European Commission would have gradually expanded EU role in social policy. This goal, however, is not widely cherished in the newcomers’ polities. Their citizens envy Irish growth and British job creation rather than the unemployment be associated with French and German labour market institutions.

Moreover, the new Member States had little input into the critical issues decided in the Constitutional Treaty. They had no vote over the agenda (the Laeken Declaration) and their voices could not block a consensus at the Convention. In a renegotiation, they will use the threat of their veto to shape any new Constitution more to their preferences, i.e. less social and less federalist.

In my view, it is not helpful to think of the Constitutional Treaty as a major step in European integration whose rejection constitutes a massive failure. Calling the new treaty a Constitution was mostly marketing – a smokescreen that allowed EU leaders to fix up their Nice Treaty foul-up without admitting an error. Remember, EU leaders never explicitly asked for a Constitution. The “Accidental Constitution“, as the brilliant book by Peter Norman calls it, emerged from the Conventional as a convenient way that Giscard d’Estaing used of packaging urgent and obvious, but politically painful institutional reform with enough political sweeteners to attract support of the 15 EU member states that had a veto in 2003.

In 2007, the future President of France will face two sad facts. First, the marketing backfired. Second, EU decision making is today governed by the botched Nice Treaty voting rules and it will take a new treaty to change that fact. If history is any guide, the new deal will have to package the urgent-and-obvious-but -politically-painful institutional reforms together with enough sweeteners to attract unanimous support from the EU27. How can this be done? After a few years of decision-making difficulties, EU leaders are finding it easier to claim that Europe still needs institutional reform. Moreover, few of the leaders who signed off on the Nice Treaty in December 2000 will be in office next year, making it easier to admit that the Nice Treaty reforms failed. This will be critical since it makes it easier to explain why Europe needs a mini-treaty – a fix-up of the Nice Treaty foul-up rather than a revised Constitution. The EU budget review in 2008 or 2009 will provide lots of carrots and sticks, so I would guess that this would be a natural time to put together a winner package.