A Touch of Dutch Gaullism edit 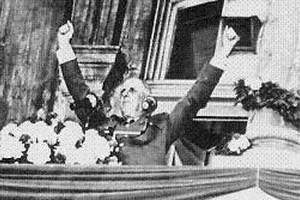 The new Dutch government has broken the silence on the future of the European Constitution since the negative referendum vote almost two years ago. Prime Minister Balkenende understands that further silence will have a cumulative and corrosive impact on the public support of European integration at home and abroad. The letter to the Parliament in The Hague addresses the recent fear for a European “superstate” of the Dutch people. Dutch diplomats are instructed to make the case for better regulation, fair burden sharing, and transparency of multi-level policymaking. The letter does not mention the fear for erratic Dutch diplomacy of European authorities and other national governments.

This government is a coalition of Christian democrats, Social democrats, and a small party of Calvinists with progressive views on economic issues. Both big parties lost the elections of November 2006. They abandoned their postwar federalist vision under the challenge of Euroscepticism of, respectively, the right (the Liberal Party and a new party of radical conservatives) and the left (the Socialist Party). The small government party was one of the winners of the referendum in June 2005 and of the general elections, together with the other Eurosceptic parties (socialists, radical conservatives). As in the current presidential campaign in France, the European question was avoided during the election campaign. Mainstream parties did not dare to politicize Europe, while fringe parties did not need to bring in Europe in order to mobilize discontented citizens.

The new coalition calls for an intergovernmental conference, starting this summer, which frames and prepares the revision of the Constitutional Treaty of Rome (2004) as a shortlist of amendments to the Treaty of Nice (2000). It rejects the grand design of Mr. Giscard d’Estaing: the EU ought to join the European Convention for the Protection of Human Rights and Fundamental Liberties, rather than ratify a new charter.

The most important mutations are the following. First, the role of national parliaments ought to be strengthened by means of coordinated subsidiarity tests. Is European intervention opportune, necessary and proportional? Second, the welfare state should remain the stake of national politics and public administration. The Dutch conception of public services entails pensions, social security, fiscal policy, culture, education, and health care. Here the European competence may only be supplementary. Third, more European integration is needed in urgent instances such as provision of energy, environmental problems across borders, climate change, asylum and immigration, European competitiveness, the fight against crime and terror, and external policies. Finally, the rules and criteria of enlargement must be formalized, in order to control and maintain the viability of a widened political union.

It goes without saying that these proposals indicate a major shift of the Dutch elite consensus from the communitarian method to a mix of Gaullism (intergovernmental protection of fatherlands, public services, and large-scale enterprises), British red lines (autonomous parliaments and welfare states), and German legalism (catalogues of national and European competences). Both political parties and state officials seem to deplore the loss of the privileged Dutch position dating back to the thirty glorious years of the EEC. They try to entrench national power in an ever enlarging union in which Dutch multinationals are bought up by larger foreign corporations, the old alliance with Germany is gone (as in the missing enforcement of the Stability and Growth Pact during the leadership of Schröder and Eichel), and the demands of new member states may clash with Dutch interests (as in the instant opening of markets for employees and self-employed).

Will the Dutch steer clear of international isolation? The letter does not mention the set of institutional reforms so dear to Germany, France, and, to a lesser extent, Britain (permanent presidency of the European council of ministers, dual majority rule, a European minister of Foreign Affairs). This suggests that the Dutch may negotiate small changes while leaving the new balance between large and small member states in place. Such a stance will be welcomed by Chancellor Merkel and a French President named Sarkozy. It will force the British negotiators in the final weeks of Blair’s rule to break their silence as well. Of course, Spain as the leader of the group of 18 governments that already ratified, will point out that most Dutch demands boil down to cosmetic reformulations, since these demands are already met in the text of Rome. The Dutch may respond by stating that prevention of a Dutch Nee is a common European interest.

Will the Dutch steer clear of yet another outburst of domestic populism when they accept Germany’s procedure for speeding up the constitutional end-game? It is hard to see how European leaders can deliver a ratified and working treaty before June 2009, the month of new elections of the European Parliament. Yet, the triumvirate of Balkenende (Christian democrats), Bos (Social democrats) and Rouvoet (Calvinists) may be forced to renounce a second referendum, thus ignoring electoral promises, an advice of the Council of Government (a high state organ), the rebellious mood of opposition parties and passionate minorities in their own camp, and the mainstream view of public opinion leaders. They may sit out temporary unpopularity of Europe and bet on voter amnesia in the general elections of 2011.

This is a risky strategy of ramming constitutional change through national parliament. It certainly is prudent to tell ordinary citizens in the Netherlands that there is no alternative to orderly Dutch retreat and acceptance of the burden of enlargement (loss of independence and power sharing with about thirty states). But such wisdom requires a courageous European dream of statesmen. That dream has gone during the ongoing crisis of Dutch identity and the emerging pursuit of a sense of security by means of status quo foreign policy.

If the French socialist candidate Royal wins, then a French referendum will be held. That would make a Dutch referendum inevitable. Either the Dutch political elite bluffs left-wing and right wing populists at home (by making a genuine and political case for Europe), or it takes refuge behind a new British cabinet under the leadership of Brown that knocks out the entire constitutional project, with or without referendum.