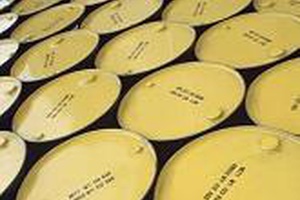 Contrary to our more bearish expectations, the price of crude oil (Brent) increased by 9% in the third quarter and has continued to rise since then, as if there were no limits in this market.  In fact, there are limits, demand is sensitive to price changes, and a correction is now due.  The main reason that convinced market participants to increase their long positions was a counter-seasonal move in inventories.  While most experts were counting on a seasonal stock build in the third quarter, ahead of the seasonal stock draw caused by the rise of heating oil consumption in winter in the Northern hemisphere, exactly the opposite happened.  According to the October International Energy Agency (IEA) report, total stocks dropped by 0.5mbd in the third quarter, versus expectations of a rise of about the same magnitude.  Other things being equal, this was equivalent to a 1mbd production cut and this sent prices to $80, then to the vicinity of $90, as OPEC shipments were not sufficient to replenish inventories.

Although several other factors, such as risks of military confrontations in the Middle East growing again, have certainly contributed to the recent spike, we believe that supply and demand dynamics have played a more important role.  On the one hand, demand from non-OECD economies, starting with Asia and oil producing countries, remains very strong and does not respond to market price signals because the retail market for petroleum products is largely subsidized in these countries.  On the other hand, OPEC discipline, largely the result of self restraint by Saudi Arabia, has made the market increasingly nervous about the possibility of an oil crunch.  For example, a small supply disruption (caused by weather or politics) or a small upside surprise in demand (cold winter for instance).  It strikes us that OPEC10’s spare capacity has steadily increased to slightly more than 3mbd, from practically zero at the end of 2004.  This should be a bearish signal, but because it is the result of tight discipline in the cartel, the markets take it as a bullish indication: ‘if they have been able to refrain from producing more and make money thanks to this strategy, why would they change?’, is asking the pragmatic trader.  Hence, if Asian and Middle East demand keep growing at the same pace and OPEC does not increase production, the market is likely to continue to play nicely for the bulls and daily quotes could visit the symbolic $100/bbl threshold.  However, we believe that this would not be sustainable and that a large correction is now looming.  We believe, prices could decline significantly from current levels in the coming months.

Taking stock of recent price developments, we raise our end-of-year target from $65/bbl to $85, a bold move at first sight, yet less impressive if compared to the high and rising volatility of crude oil price: the standard deviation of monthly quotes is around $10.  Starting from a higher level, we have raised the level of our baseline forecast by $11/bbl in 2008.  However, at $70, the average is still some $20 below current prices, and we anticipate that the price of crude oil is likely to drop to the mid sixties in the course of next year.  Two forces are at work: a shift in demand as global growth slows, especially in the US and in Europe, and a movement along the demand curve, reflecting six years of higher prices.  The second effect is only beginning to show up as demand destruction: in the OECD (still 58% of world demand) at least, demand is practically flat since 2005, despite robust GDP growth.  The combination of these two powerful macro forces will have dramatic consequences for prices, we believe.

If OPEC does not increase production beyond the 0.5mbd already ratified for November, a further price hike, to $100/bbl and maybe beyond, would be the catalyst for further demand destruction.  This is likely to occur in the OECD area, where market price signals are quickly passed through to final users, starting with consumers.  A drop in demand in a context of weakening global GDP growth would reverse the momentum in the markets, we think, with traders and speculators scrambling to move from long to short positions.  This would be the worst outcome for OPEC, since both volumes and prices would turn negative, causing painful cuts in oil income.  OPEC discipline would then be seriously tested, as many producers would try to compensate their loss of income by raising production, thus amplifying the downward spiral in prices.  Conversely, if OPEC increases production enough in November/December, say by at least 1mbd, then a soft landing for prices would become possible.  Because the previous scenario – that we have quantified in our risk analysis – would threaten the coherence of the cartel, we believe that OPEC is likely to avoid it, if this is possible.  Some signals, such as sharply rising spot tanker fixtures, make us think that the second scenario is more likely.  Practically, we think Saudi Arabia could use the agreed quota increase, effective on November 1, to beef up production and thus shipments by a significant amount, given that, currently, it is the world producer that has the largest spare capacity.  However, because OPEC has been slow to react to the depletion of inventories and because it takes time before shipments reach their final destination, we do not see tensions easing before early next year.

One of the biggest surprises to the markets in 2006 was the abnormally weak demand from North America in the first quarter.  Since this winter was one of the warmest on record, it is likely that the drop in demand, taking into account the usual seasonal pattern, was weather related.  According to the US National Oceanic and Atmospheric Administration’s (NOAA) recent projections, the 2006 story could be repeated in 2008, with a more than 33% probability of a warmer (than usual) winter in most of the US, one-third being the ‘equal chance’ threshold (NOAA considers three equally distributed possibilities, near normal, warmer, cooler).  If these still fragile projections came true, the current level of inventories of refined products would be more than sufficient for final uses and the price of refined products would probably drop and with it the price of crude.

In the long term, the bulls win: oil is a finite resource and Saudi Arabia will have a growing market power in the future.  We think other suppliers will exhaust their own oil fields, and the price of crude will rise, probably faster than what the standard Hotelling rule (the growth rate of the price should be equal to the long-term interest rate) would suggest, because of the growing market share of the dominant producer.  Conversely, there is room for debate over the medium-term outlook: at $90/bbl, the level of economically sensible world oil reserves is significantly higher than at $50.  However, supply is relatively inelastic, even in the medium term, and we believe that global GDP growth is more likely to pause in 2008 than to tank.  The global capex ‘super-cycle’ fuelled by the immense need of the new giants of the global economy has many years to go, and even in OECD countries, we believe the business cycle is very far from having run its course.  Consequently, we see crude oil prices rising significantly in 2009 and beyond.