UK: there’s something in the air – and it does not smell too good! edit 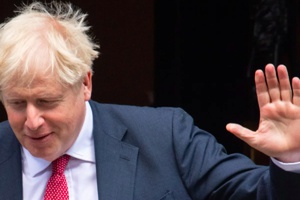 The British government has not really had a good time since the outbreak of the Covid pandemic, nor since the United Kingdom left the European Union, whilst most recently it has found itself mired in a series of damaging leaks about the way in which it conducts its relation with certain business interests. Its one success has been the efficient and effective rollout of a Covid vaccine programme – which itself owes more to the effective operation of those National Health Service workers who have been administering the vaccine than it does to actions by the government. Three areas of activity suggest a government which will not be known by historians for its competence and even its honesty.

First is its handling of the Covid crisis itself. Whilst all governments were generally ill prepared for dealing with the epidemic, the British government seemed to make a series of mistakes and showed itself very unprepared for the outbreak of Covid 19.

Second, but largely overshadowed by pandemic issues, there are the problems which have arisen following Britain’s exit from the European Union. Here it is the lack of preparedness by the UK government for Brexit, even allowing for the last minute agreement reached in December 2020 just days before the UK was due to leave. Not only did this severely restrict Parliament’s ability to debate the proposed terms of exit, in practice limited to a single day’s debate, but it also left both business and the population at large both under prepared and unclear as to what was required to do business with or visit European countries.

Third, and still largely unresolved, has been the series of leaks concerning the way in government contracts over Covid supplies, modes of lobbying by certain interests, whether or not the Prime Minister Johnson was willing to let people die from covid rather than imposing a further lockdown, and even who paid for the redecoration of the Prime Minister’s accommodation in Downing St. Each of these issues will now be briefly reviewed.

As far as the government’s handling of the Covid pandemic has been concerned, most questions relate to the way in which it responded during the early months. Whilst the government maintains that it is still too early to hold an inquiry into its handling of Covid, there remain questions to which answers. Did it respond too slowly to the first signs of the pandemic? Why did it not have sufficient supplies in place of the equipment needed to protect health workers and others from Covid? There had been a warning from a report in 2016 that an epidemic of some kind was expected – a variation of the annual flu virus for example.  Why was not priority also given to those people in care homes (mainly the elderly who were most at risk of dying from Covid), where deaths subsequently account for almost a third of all deaths from the virus? Why was there delay introducing first (and indeed subsequent lockdowns) lockdown? Were there measures in place to see that people who were expected to self-isolate actually did so? Why was the system for tracking and tracing people possibly infected by Covid contracted to the private sector rather than using a well-established and effective local public health system and why did the private sector prove so ineffective? Why were children expected to be home schooled when millions of people did not have either access to the internet nor the equipment to use it? Why were university students (over a million of them) allowed to go to university in the autumn only to be sent home again shortly afterwards, then not allowed back until mid-May 2021, sometime after much of the rest of the country has been opened up in a return to something like normal? [1] Last but not least will be the question of how Britain ended up with the highest number of Covid deaths in Europe. There are other questions which a public inquiry will no doubt need to consider, but these give the reader a flavour.

Second are issues which arise from Brexit. Undoubtedly the one which has gained the most attention is the effect  of the Northern Ireland protocol, which despite PM Johnson assuring people that there would be no border between Britain and Northern Ireland, effectively there is one the middle of the Irish Sea. Despite the protocol being agreed in 2019, little or no preparation was made for the consequences of its coming into force on January 1st 2021. One result was that trade between Britain (mainly England) and Northern Ireland has been severely disrupted, resulting in supermarket shelves being left empty of essential supplies, and businesses, large and small, as well as individuals, having to complete considerable documentation before sending products to Northern Ireland. The Democratic Unionist Party, on which the Johnson government had partly depended to get legislation through Parliament before the 2019 election, feels it has been betrayed by the UK government, violence has broken out on the streets of Belfast and in other parts of the province, threatening the 1999 Peace Agreement which helped bring stability and some prosperity to the Province following the nationalist/unionist troubles between the late 1960s into the 1990s. The UK government unilaterally decided to drop all border requirements between Britain and the province, thus breaking the protocol treaty, and with the EU threatening legal action against the UK government. Whilst discussions between the two sides continue over how the protocol might be amended to minimise some of the problems, one cannot but wonder why neither the UK government nor the EU Commission undertook some work about the possible ramifications of the protocol in the year between its agreement and the UK’s final  exit from the EU. But as far as importing and exporting goods etc to and from the EU are concerned, many small businesses have simply found it too costly to continue, whilst others have decided to open new outlets within the EU and scale back their UK operations, with consequential UK job losses. Individuals also have to fill out customs declarations when sending things into EU countries, probably with most of them simply being described as gifts with a low value to avoid customs duties and import taxes or VAT. But the biggest problems have been faced by the fishing industry. One of the strongest supporters of Brexit,  the fishermen had accepted Johnson’s promise about taking back control of our fishing limits, only to find that the final agreement meant they had also been betrayed with EU fishermen still allowed to fish in British coastal waters, even if there was a limit on the catch they might make. Hardest hit have been those fishermen producing fresh shellfish and lobsters etc, which need to be delivered fresh to EU ports, but which the extra paperwork and customs checks means such deliveries are delated, so the fish are no longer as fresh as they should be. The issue has not been helped by the British government’s delay in providing EU fishing companies with the necessary licences to operate in British waters – the French government has threatened retaliatory action against the UK’s service sector!

But it is the last area, hinting at possible corruption and cronyism at the heart of the government, which has occupied the popular press, radio and TV over the last month.  Three issues are of concern. First is the way in which government contracts for virus related products such as PPE were let, and whether or not those whose business interests were close to Ministers or the Conservative party were given preference through a VIP or priority route. The government’s defence is that faced with a pandemic it needed to act as speedily as it could in resolving supply issues, though it is interesting to note that that some of those who received contracts had little or no experience in the health field whilst others from that field did not obtain contracts. Second are questions about the way in which some businesses lobby government, brought about by the ease with which former Prime Minster David Cameron lobbied the finance minister and his civil servants on behalf of a now defunct private bank, even if such lobbying proved largely unsuccessful. This situation was made worse by the revelation that at least one civil servant had worked for the same company whilst still in the service, and by the ease with which former ministers and civil servants acquire jobs in the private sector once they have left office. Last are questions about who paid for the redecoration of the Prime Minister’s flat in Downing St and when, given its disputed cost. The Prime Minister has steadfastly maintained that he personally meet the cost, but doubts remain as to whether or not someone or other met the costs initially.[2]

In the end do all these questions really matter? Survey evidence suggests that the electorate are not apparently bothered – what matters to them is how quickly they can get the vaccine and how quickly lockdown restrictions are removed. For this author, an observer of British politics for over 60 years, I can safely say that I am not aware of a more incompetent and inexperienced  (and dare I say corrupt) government in my lifetime – but it may just be that the kind of cultural change through which Britain and other countries have undergone over the last forty years have changed what were regarded as the norms of politics, a process perhaps speeded up by the rise of populist slogan based politics associated with the rise of Trumpism and the Brexit process.

[1] Whilst all the four member nations of the United Kingdom originally followed the pat laid out by the UK government, over the Summer of 2020 the various nations began to follow different paths, largely because health is a devolved functions for the Scottish, Welsh and Northern Ireland governments, with each seeking to tackle Covid in their own according to their different circumstances. Most of the questions here relate to the way in t=which the Johnson government tackled Covid and how it affected England.