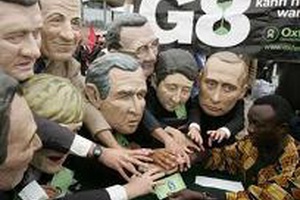 The 1980s have seen the 2nd wave of economic globalization of modern history. It should not end like the first during the 19th century. Economic crises and wars often keep pace. The first energy shock of 1973, the start of the economic reforms in China at the end of the 1970s then in India and finally the fall of the Berlin Wall in 1989, gradually led to a huge transformation of the world economy. The idea to gather a G7 or even the G8 under the current format is clearly unsuitable when we see clouds accumulating on emerging countries, China and India included.

The labour force markets, those of goods and services, those of natural resources, including environment, and finally the capital markets suddenly conquered a space and an unprecedented volume. But with this new " flat world ", the regulation mechanisms have stayed " flat " and still widely dominated by the most developed countries despite their demographic and economic weight gradually moving back.

The current crisis is not only a financial crisis. Even less that of the United States alone as we often read it. The bad image of the economic and political « unfinished Europe » as the progressive contagion to the emerging world show it well. The crisis is fundamentally the expression of the emergence of a " New World " which is not matched institutionally. Starting from a speculative bubble with free markets badly regulated internationally (without mentioning the awful role of the offshore places opened to uncontrolled speculation), the crisis leaves the nation-states largely paralyzed and in great part because they are divided. Notably, the most influential countries of the world do not exchange enough except for a club of rich countries less and less relevant and quite anglo-saxon in its vision of the world.

The creation of the G6 in 1975 in Rambouillet took place during the energy shock of 1973 and the world monetary disorders which followed the abandonment of the fixed exchange rates post-war regime. But from crisis to crisis, it became more and more obvious that despite its informal format can be fertile, its orientation and efficiency suffer from an evident lack of representativeness.

The current crisis is already the second of the 21st century. These repetitive crises call clearly for a new world architecture. First of all around the international existing agencies like the IBRD, WTO, ILO or still to create on environment (even if the IGEC/GIEC can play this role in the short term since climate change is becoming one of the big threats of the 21st century). Then, in the absence of a world government, it would be also indispensable to have a small group of representatives from the largest continental countries of the New World: the United States, the European Union, Japan, China, Russia, India, Brazil, South Africa and Saudi Arabia. To these twelve members should finally be added three or four representatives of the NGOs as they now co-opt themselves at any international summits.

It would be all in all about sixteen interlocutors to exchange their visions of the world economic challenges, play an impulsion role within the international institutions always slow to maneuver, and finally to diffuse some collective confidence in a more and more narrow world economy. We signatories of this text, call up for an emergency summit of the new G16 dealing with the current financial crisis.