A Carbon Levy on Imports to Fight Climate Change? edit 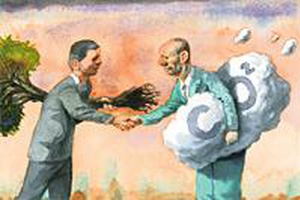 Trade no doubt contributes to global warming. Yet trade is also key to stopping global warming. One of the main obstacles for the United States to adopt climate legislation is a concern for US competitiveness. The argument goes something like this: Why should US companies cut carbon emissions if their competitors in China, India and Brazil can continue to emit all they want, even under the Kyoto Protocol? The same line can be heard in Europe, this time with the US as the main culprit. How can this collective action problem be resolved? The ideal solution is an international agreement in which all countries on the planet agree to cut emissions albeit on a variable scale. But what if no such agreement can be made?

One of the alternatives is for countries that do cut emissions to impose similar efforts on products imported from “free-riding” states. Put differently, to level the playing field between, for example, European producers and US imports, Europe could impose a carbon levy on US imports until the United States enacts climate legislation of its own. With the end of the current Kyoto limits in sight (2012), a carbon tax is an option put on the table by former French Prime Minister de Villepin. It is at least implicitly supported by EU Commissioner Verheugen. Across the Atlantic, the Bingaman/Spector Low Carbon Economy Act, submitted to the US Senate on 11 July 2007, includes a similar provision: Instead of a tax on imports, after 2020, the United States would require that imports from certain countries that are not cutting their emissions, buy US emission permits or allowances to get entry into the US market. Such “International Reserve Allowances”, like a carbon tax, would impose a cost on imports into the United States broadly similar to the cost imposed on domestic products.

The advantages of such a unilateral trade provision are relatively clear. By levelling the economic playing field it enables domestic industries to stand behind climate legislation. Without such trade provision US industry in particular might never agree to climate legislation. Imposing a carbon levy on imports also forces foreign producers to internalize the social cost or harm caused by the carbon they emit in their own countries. Foreign producers (albeit only those who export) thereby have an incentive to switch to cleaner production. Foreign governments, in turn, are given an incentive to adopt their own climate legislation so as to avoid the import tax or allowance requirement, thereby paving the way for the first-best solution of an international agreement.

At the same time, such unilateral trade measures are not without risk. Like most trade restrictions they would cause inefficiencies and import-competing industries might exploit them not to protect the environment but to protect against imports. Unilateralism where Europe or the United States impose their laws extraterritorially on carbon emissions abroad might also upset countries rather than guide them to an international agreement. Finally, there is the risk of a WTO challenge.

So what does WTO law say about a carbon levy on, for example, steel imported from China based on the carbon that was emitted in the production of the steel in China? Can WTO members regulate such foreign-emitted or off-shore carbon? The legal answer is unclear. Much depends on the specific legal instrument that the regulating country chooses. In terms of WTO law, it would be extremely difficult, for example, to qualify a country’s failure to adopt climate legislation as a “subsidy” or environmental “dumping”. If China does not impose climate legislation in the first place, it is hard to speak of either a subsidy or dumping.

Better options would be to justify a carbon levy on imports as “border tax adjustment” or, better still, to excuse it directly under the environmental exception in GATT Article XX(g). The border tax adjustment route is complicated. The basic idea is to compare a carbon levy to, for example, an excise tax on cigarettes. We find it quite normal that when Chinese cigarettes are exported to the United States, they do not pay the Chinese tax, but rather the US tax. Goods are, in other words, taxed at destination or the place of consumption. The same could be argued for a carbon levy. There are, however, several problems with this analogy. First, border tax adjustment is only permitted for so-called product taxes (like VAT, sales taxes or excise taxes); not for so-called process or producer taxes (such as income taxes or social security taxes). The United States, for example, can impose its excise tax on Chinese cigarettes; it cannot tax Chinese imports to adjust for higher income taxes in the United States as opposed to China. This follows the WTO’s general preference for product over process regulations. A core question is, therefore, whether a carbon levy is sufficiently linked to, in our example, the exported steel as a product or whether it is purely a process or producer tax which cannot be adjusted at the border. Second, even if border adjustment were permitted, the principle of non-discrimination between imports and domestic like products continues to apply. According to current WTO case law, imported steel produced with coal (high-carbon emissions) would be regarded as “a like product” compared to domestic steel made with natural gas (less carbon emissions). The fact that the former pays a higher tax, or must submit more emission allowances, than the latter could then be found to be discriminatory.

Given these difficulties, the best way to proceed may well be to concede a violation of WTO rules and to jump immediately to the exception in GATT Article XX(g) for measures “related to the conservation of exhaustible natural resources”. Climate legislation aims at protecting the entire planet through conserving, more specifically, the earth’s atmosphere. It is, therefore, “related to” the conservation of an “exhaustible natural resource”. The fact that a carbon levy relates to foreign-emitted carbon (e.g. in China) is not conclusive. In the Shrimp-Turtle dispute the US was allowed to ban shrimp based on a process that occurred abroad (killing endangered and migratory turtle). With a carbon levy on Chinese imports, the jurisdictional nexus with the US or Europe would even be tighter: the carbon is emitted in China, but as it crosses borders it is as harmful for the US as carbon emitted within the US. The real test for justification under GATT Article XX(g) is found in the introductory phrase or chapeau to Article XX. This phrase relates to the specific application of climate legislation, in particular: does it discriminate between countries or is it a disguised restriction on trade? WTO case law has interpreted these conditions rather leniently. Three elements stand out. First, the country imposing the unilateral carbon tax or allowance requirement must first make good faith efforts to reach an international agreement. Second, the calculation and other procedures linked to the carbon tax or allowance requirement must respect basic fairness and due process. Third, the restriction on imports must be flexible enough and be adjusted to local conditions in foreign countries. In our example, this would require lower or, at times, no restrictions on imports from, for example, developing countries and countries that have their own emission cuts in place. The levy should also seek to track actual carbon levels emitted by the imported product in question; not country-wide carbon levels which are outside the control of foreign exporters. In case exporters fail to submit data on their carbon footprint, averages based on the predominant method of production could be used. Finally, to set the price per ton of carbon, the import levy must be equal to the domestic carbon tax, or not exceed the market price for domestic emission allowances of a representative period. This period could be the market price of the date of importation or an average monthly market price.

In sum, although there remain a lot of open questions, a carbon levy on imports, when designed carefully, can survive WTO scrutiny. The problem is not so much the long-standing debate between product and process regulations. Instead, the devil is in the details of the specific implementation of the levy in light of the chapeau of GATT Article XX. This does not mean that trade restrictions are good policy or clever politics. Ideally, the mere threat of imposing them will force free-riders to agree to a post-Kyoto deal. Opponents of climate legislation should, however, not use WTO law as a scapegoat for inaction. Instead, by signalling that unilateral sanctions are an option of last resort, the WTO can positively contribute to the enactment of both climate legislation in hesitant countries like the United States, and a post-Kyoto international agreement.