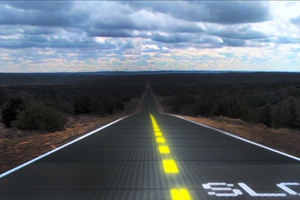 Contrary to its neighbors and partly due to the low cost of its nuclear electricity, until recently France did not show much interest in solar energy. The country now seems to be catching up. Public policies are implemented, both to encourage households and to foster an industry which has not yet reached maturity. Only thing is, one can hardly make sense of some of these policies. The politicians involved seem to suffer from confusion between communication and policy making, on the one hand, between corporate interests and public benefit, on the other. In this respect, the recent decision to launch 1000 km of solar roads is a textbook case.

Let's start with a naive question: does PV need so much space and is space so scarce in France that one should use the roads?

France prides itself for having just launched the largest solar photovoltaic plant so far in Europe. With a capacity of 300 MW, this giant solar farm occupies a continuous surface of 2.6 km2 and will produce approximately 0.34 TWh per year. The annual electricity demand in France is about 500 TWh. If the country wanted to cover one quarter of its electricity demand with PV, less than 1000 km2 would be sufficient.

Available space, thus, is not the issue. Not only photovoltaic farms can be installed in most of these spaces, but they may contribute to solve other problems. Let's take three examples.

Agricultural land. Large PV plants are perfectly compatible with the breeding of animals (sheep, hens, bees etc.) and gardening. Solar panels protect animals from the rain, wind and sun. Some plants, e. g. lettuce, grow very well below the panels. The so-called Solar Sharing approach is currently deployed in the island of Ukushima, Japan. The actual surface footprint of photovoltaic panels is marginal. And farmers surely appreciate the additional income provided through leasing their land. Isn’t it better than subsidizing agriculture?

Water bodies. Ciel et Terre, a startup that happens to be French, has developed a floating solar photovoltaic technology both efficient and environmentally relevant, which helps reducing the evaporation of fresh water as well as the proliferation of green algae. The cost per kWh is only 8 c€.

Well, maybe the technology of the Wattway solar road project supported by the French Minister of Environment does make a difference?

Since we are not engineers, let us just consider the costs. Shade houses, for example, come with a price. A support structure costs 50 to 80 c€/W, according to experts, against 7.5 c€ for the standard structures of large ground-mounted photovoltaic plants. Using shade houses increases CAPEX (capital investment costs) by a factor of about 1.5. But it remains four times cheaper today than the €6/w CAPEX of the Wattway solar routes.

Besides, one should not neglect the fact that the performance of a solar road is expected to decrease over time, for physical reasons that a teenager can easily understand—like dirt, or erosion. This translates into substantially higher cost per kWh.

Costs, some will say, are not a valid argument. Remember, it used to serve against solar energy as a whole. And sure, 20 years ago, a ground-mounted photovoltaic system cost around €6/W. In 2016 it is less than one euro.

One could thus consider that the costs of this brilliant emerging technology are brought to fall: the industrial scaling up permitted by the construction of 1000 km of roads is precisely what is needed to accelerate the decline in costs.

But this is not a reasonable thinking. For the standard photovoltaic CAPEX to decrease by a factor of 6 in 20 years, billions and billions of dollars were poured in Germany, China, Japan, Korea South, Taiwan, United States, etc. And it took 20 years.

No wonder if financial media Equities.com finds it hard to understand why the French Minister of Environment is so stubbornly insisting on having trucks and cars driving on PV cells. The Electronics Engineering Video Blog released a hilarious video on the topic, denouncing an engineering folly.

So it is time to raise not very pleasant, though serious questions. If one accepts that in the context of the French energy transition, the Wattway solution has absolutely no economic relevance against the other solutions available, then either this decision is just an irresponsible communication coup, or some public money is going to be spent to fund an industrial project in no way related to the country’s energy transition.

Industrial policy, in short. Why not, after all? But wait. Does it mean that the funds dedicated to this experiment will be diverted from other projects, with a stronger impact on the country’s CO2 emissions? The estimated cost of the solar road project is 2.7 billion euros. Think of the number of projects, think of the avoided emissions that could be financed with such an amount. In a context of both fiscal austerity and climate emergency, the Minister’s decision is questionable.

But what is hard to defend from an environmentalist point of view may be justifiable from an economic point of view. Then the project should be relabeled as an industrial venture, supported and partially funded by the government. It should, of course, be submitted to proper assessment of the expected benefits (in turnover for export, jobs, etc.) with regard to the investments. Experts should also consider the possibility for copycats to emulate this technology if ever, in ten or twenty years, it proves competitive. And the decision-makers should also be asked whether they know the difference between supporting a promising industry and subsidizing a large, wealthy company—wealthy enough to finance its fantasies.