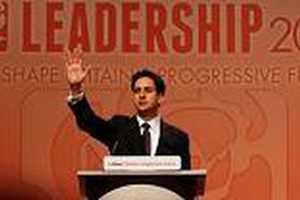 This week, the Labour Party’s annual conference was marked by the inaugural speech of its new leader, Ed Miliband. The campaign for the leadership of the Labour Party had been perilously close: Ed Miliband only emerged as leader after four rounds of voting. His brother, David Miliband, former Foreign Minister in the government of Gordon Brown, had been the favourite to win the election. Keen to appease the tensions that the campaign had unleashed within the Party, Ed Miliband’s first speech as leader was a reconciliatory affair: the Guardian newspaper warmly described him as staking out the reformist centre-ground, much like Tony Blair had done in the mid 1990s. But what of New Labour? And what future for the British left?

Miliband’s election has come at a turning point for the Labour Party. In 1997, Tony Blair led the Labour Party to its first election victory since the 1970s, and brought it into power after 18 years of Conservative Party rule. In power for 13 years, the Labour Party had become the party of the establishment. A generation of young people in Britain had never known anything other than a Labour government, as had been the case with the long period of Tory rule from 1979 to 1997. This changed in 2010 when the party lost the general election. Though unable to win a majority in the House of Parliament, the Tories were able to form a coalition with a third party, the Liberal Democrats. For the first time in well over a decade, the Labour Party was no longer the party of government.

It is too early to tell whether Ed Miliband’s arrival at the head of the Labour Party signals a significant new departure for the British left. The signs, however, are less than encouraging. Though Miliband spoke a great deal in his speech to his party about being at the head of a ‘new generation’, one of the main reasons for his success in the leadership election was that he was untainted by association with any of the main Labour Party figures of recent years. Ed Balls, another candidate to the leadership, had been a protégé of Gordon Brown and was firmly associated with the outgoing prime minister. Ed’s brother, David Miliband, was a pure expression of Blairite New Labourism: after years spent at Tony Blair’s side as an unelected head of policy at 10 Downing Street, David was parachuted into a safe Labour seat in 2001. From that date on, his rise within the party was meteoric: entering government as junior minister after only a year on the back benches, he became foreign minister in 2007. David Miliband was a vocal defender of the New Labour legacy, arguing that Labour had lost the election because it had strayed too far from its New Labour roots. Ed Miliband, in contrast, was perceived as neither a Blairite nor a Brownite. For many Labour party voters, he was an untarnished figure, able to carry the party through into a post-Blair/Brown era. That Ed was untarnished is ridiculous: he was after all a minister in the outgoing Brown government. But that was the impression he gave in the leadership campaign.

Where Ed Miliband intends to lead his party is however far from clear. Dubbed ‘Red Ed’ by some of the British media, he dismissed this as nonsense and made it clear in his speech that unqualified support for Trade Union strikes was out of the question. But there was little in Miliband’s speech to indicate where he wanted to take the Labour Party. Much of the speech looked to the past and involved Miliband in an exercise of critical reappraisal of the New Labour record. Supportive of the early years of the Blair government, Miliband argued that the government had made mistakes on issues such as tuition fees. He also made clear his view that Britain should not have gone to war in Iraq. There was something curiously insular about his speech and about the Party’s conference this week: much of the discussion has been conducted by disenchanted and disabused Labour Party members, wondering what exactly has gone wrong in recent years and where did the Party loose its way. Though this is revealing of the Party’s isolation from society at large, it is also testimony to the legacy of the Blair years. The most striking feature of the Labour Party under Blair was not the New Labour doctrine, which was thin at the best of times. Rather it was the loyalty commanded by ‘The Man’, as Chris Mullin calls Tony Blair in his irreverent memoire of his time as a minister in the Blair government (A View From the Foothills, Profile Books, 2009). Organized around faith in an individual rather than in a coherent body of ideas, the Labour Party suffered enormously as a result of Blair’s historical miscalculation over Iraq. Miliband’s check-list speech on what was good and bad about New Labour reflects this deeply felt need within the Party to take stock after the love affair with Blairism.

The Labour Party is thus at a cross-roads. New Labour was born out of an unashamed shedding of key Labour shibboleths, central among them the commitment to the nationalization of industry, the famous Clause 4. Accommodating the Party to a post-ideological age was the historical mission of Tony Blair. This involved a coruscating critique of its traditional social base, the British working class, a move that left many Labour members and voters unsure of what they stood for or who exactly they represented. Today, with austerity measures putting a severe strain on government largesse, room seems to be opening up for more partisan politics and Miliband’s speech was sprinkled with references to taking a harder line on the financial sector and ensuring that cuts didn’t prejudice economic growth and a recovery in jobs. However, it was also clear that Miliband was not going to renege on the key structural transformations undergone by the Labour Party since the early 1990s. Miliband spoke of a need for ‘a new politics’ but committed himself to the all the buzzwords of the old. Perhaps unsurprising given that ‘Red Ed’ was also a leading author of Labour’s 2010 election manifesto.