Fiscal money as a solution to Italian eurowoes edit 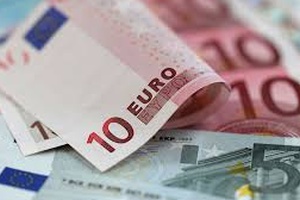 In Italy, the strong electoral performance of Eurosceptic parties such as M5S and Lega (now on the verge of forming a new government) has been ascribed to the country’s dismal economy. Italian GDP at constant prices in 2017 was €100 billion below its 2007 level – a 5.5% decrease! Meanwhile, export grew 7.8% - not a stellar performance in ten years, but a clear sign that the main culprit is lack of domestic demand. Had Italy’s GDP grown at the same rate as exports, today it would be 14% higher (i.e., € 241 billion).

This state of affairs has caused Italy’s unemployment rate (including also discouraged and involuntarily part-time workers) to be approximately 30%. There is no question that a huge output gap exists. To be sure, the Italian economy suffers from other problems, too. Productivity growth has been miserable for the last 20 years. But, then again, this is at least partly a consequence of depressed demand. In 2017, capital expenditure in real terms was 18.5% lower than in 2007. Low private sector demand, public budget restraints, and low capacity utilization have all had long-lasting negative effects on investments and productivity.

As fiscal rules constrain Italy’s ability to reflate demand by issuing debt, and with monetary policy being as accommodative as it gets, an alternative instrument is required. Fiscal Money provides such instrument.

Our proposal is for government to issue transferable and negotiable bonds, which bearers may use for tax rebates two years after issuance. Such bonds – called Credit Tax Certificates (CCF) – would carry immediate value, since they would incorporate sure claims to future fiscal savings, and would be immediately exchangeable against euros or usable as payment instruments (in parallel to the euro) to purchase goods and services.

CCF would be allocated, free of charge, to supplement employees’ income, fund public investments and social spending programs, and reduce enterprises’ tax wedge on labour. These allocations would increase domestic demand and (by mimicking an exchange rate devaluation) improve enterprise competitiveness. As a result, the output gap would close without affecting the country’s external balance.

In a recent post on Telos, Eric Chaney remarks that our proposal amounts to expanding Italy’s debt and escaping the Stability Pact. Nothing of the sort! Under Eurostat rules, CCF would not constitute debt – by construction, they would be “non-payable deferred tax assets.” As such, they would not be recorded in the budget until they were used for tax rebates which, according to our proposal would happen two years after issuance, when output and fiscal revenue will have recovered). That CCF do not create deficit at issuance and do not constitute debt is not a matter of opinion, it is an accounting fact. In any case, safeguards clauses are incorporated in the proposal to protect the budget in the unlikely event of revenue shortfalls.

Based on very conservative assumptions (that is, fiscal multiplier of 1 and a resumption of private-sector investments to recover half of the drop since 2007), GDP growth would generate additional tax revenues sufficient to offset the tax rebates. Projections show that these would peak at around €100 billion, which compares to more than €800 of Italy’s total government revenue. Thus, the cover ratio (that is, the ratio between government gross receipts and tax rebates coming due each year) would be large enough to accommodate for possible shortfalls due to future recessions.

Some argue that, even if Fiscal Money formally complies with Eurozone rules, it goes against their spirit by circumventing them. This is not true. Eurozone rules require countries to limit financial risks by avoiding excessive debt. But such risks are created by types of debt on which countries may be forced to default. Which is why the definition of Maastricht Debt does not include non-payable tax credits or any form of revolving non-financial debt (such as trade payables).

By activating a Fiscal Money program, Italy would solve its output gap problem without asking anything to anybody. No European treaty revisions would be required. No financial transfers would be needed. Public debt would stop growing and start declining relative to GDP, thus attaining the Fiscal Compact goal. Public finances would be sustainable as long as the ECB confirmed its “whatever it takes” commitment – which it would have no reason to disavow with Italy’s debt stabilized.

Have we found the ‘philosopher’s stone’? Certainly not – in an economy with large resource slack, the multiplier works its effects mostly on output and moderately on prices. And if external leakages are contained through improved competitiveness, the multiplier effects are the largest possible. Fiscal Money is about mobilizing unutilized resources, accelerating investment and inducing banks to resume lending. As the Financial Times has recently commented, the proposal is “technically possible.”

Even if Italy were to lessen its fiscal discipline and decide to over-issue Fiscal Money, only recipients would take the hit, as the value of the instrument would fall while over-issuance would neither affect the euro nor raise default risk on an instrument that is default-free. In any case, the large cover ratio would make this scenario totally unlikely. Besides, it is only fair to remember that Italy's inability to rein in net public spending is a false myth. Between 1998 - 2017, Italy has been the only Eurozone country to achieve a primary surplus in each single year (other than 2009). If anything, Italy has suffered from excessive public budget restraint, which has led to its dramatic output decline.

A strong recovery of the Italian economy (and possibly of other Southern Eurozone countries, which could replicate the Fiscal Money framework) is an indispensable precondition for Europe to cooperate effectively and harmoniously. Fiscal Money is the appropriate tool to make this objective achievable.

The Group of Fiscal Money, Italy (Biagio Bossone, Marco Cattaneo, Massimo Costa, Stefano Sylos Labini). Biagio Bossone wishes to emphasize that the opinions he expresses jointly with the Group on Fiscal Money, in this articles as well as in all others on the same subject, should be considered as personal and do not reflect necessarily those of the institutions and organizations with which he entertains professional relationships.